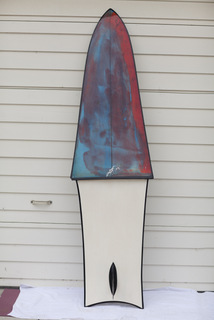 Tom Morey also known by the name “Y”, is undoubtably one of the most innovated surfboard shapers of our time. Morey has contributed a great deal to surfboard design and the sport of surfing. Some of his accomplishments include starting the first surfboard contest, the Tom Morey Invitational Nose Riding Championships and introducing the first removable skeg on a surfboard. He also invented the body board during his time living in a small beach house on the Big Island of Hawaii. In 1964, Tom began Tom Morey Surfboards, which later became Morey-Pope when he partnered with fellow shaper Karl Pope. Most recently Tom has been helping to innovate the design of soft surfboards by partnering with Catch Surf in 2007. 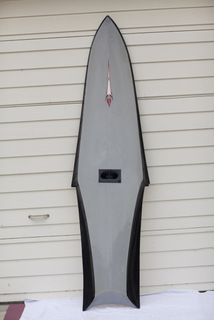 * Photos and boards from the collection of John Mazza

Description: “ Tom Morey “Air Lubricated” Future Craft AL#1 (the only one made. The board was made in the winter of 1970 when Morey created the air-vented 1 step (two planes) AL#1. All running surfaces are to some degree or another concave to the water flow. The central “step” is vented from the top and results in a board that,due to the “air lubrication”is breath-takingly fast. While not designed for maneuverability, it nevertheless reached incredible high speeds quickly.  The AL#1 was a precursor to the boogie board and way before its time. The board and other Morey “space boards” were featured in the March 1971 Surfer Magazine and included air lbricated, motorized and sodium bicarbonated boards. “