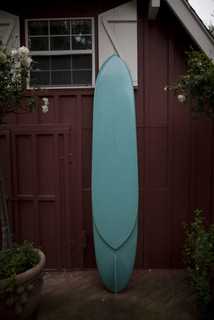 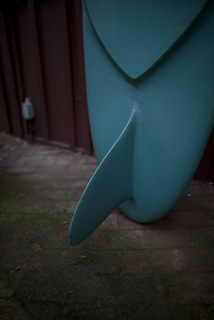 * board and photos kindly contributed by John Mazza

Board description: ” This is the original proto type board for the Interisland Kelly Hydro. John Kelly was a legend and owned InterIsland surfboards. He was the developer of the hot curl back in the 30′s and wrote Surf and Sea which describes his development of the Hydro. As I said this is the board he used to develop the Kelly Hydro and I got it from his daughter out of his house when he died several years ago. I have three hydros but this one has no logo and was shaped in his back yard before he took it to the shop for production  John Kelley is a very important figure in the development of surfboards and this is probably the rareist Kelly around.”