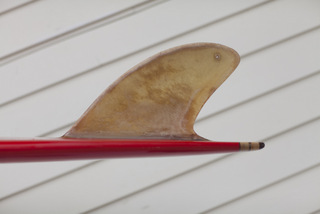 Robert ” Sparky” Scheufele was a shaper who developed concave nose designs and the first solid fiberglass surfboard fins, the first modern speed fin, the textured deck, and light glassing. He also named the surf spot known as “Big Rights” and initiated the environmental group “Save Our Surf”. Sparky shaped for and help start Inter-island  surfboards. Many young Honolulu locals worked or surfed for INTER-ISLAND SURF SHOP®. 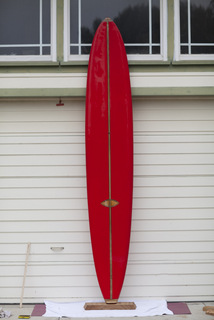 *Board Photos and info contributed by John Mazza

Board description:  ”1962 InterIsland gun shaped by Robert “Sparky” Scheufele.  He was always known as Sparky and was one of the longest lasting and best shapers around. This is one of my favorite boards . The shape is spectacular and is in my mind one of the ultimate guns from the early era.Sparky gave the board to Brad Dugan who owned Lightning Bolt Maui and it hung in the Maui shop for many years until I bought it from Brad.”